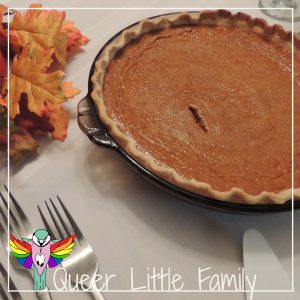 Okay, so I know, I’m British, we don’t do Thanksgiving and we do enough American crap as it is what the hell? Except, my wife is American remember, and loves Thanksgiving. And it’s a become a bit of thing for us because it’s the one time I can get my mother and sister to commit to spending time with us. We don’t do Christmas altogether – my mum doesn’t care for it much, my sister has two kids and has to juggle their dads, the rest of my family lives in Coventry (or further) and we’re not close anymore (mostly my fault). I know this gets to my wife, her family is massive and close and spend all the holidays together.

So just the two of us have Christmas together – with her family on Skype at some point – and see my sister and the kids on Christmas eve.

So we kinda blow the shit up on Thanksgiving.

This year there will be an undetermined amount of people and children. Much like last year.

Last year was the same – I’m not sure how many people there were. Also, we had a new kitten – Seymour – and set off fireworks in the park. Except we forgot there are no lights near the park so it was pitch black and none of the smokers had a working lighter so someone had to go get matches. The rest of us stood around waiting in the dark with the torches shining from various mobile phones.

I actually have no real idea what Thanksgiving is about. Something about giving thanks. Something to do with Native Americans? And pilgrims? I’m not sure, everything I know about Thanksgiving comes from television shows and films. Not the greatest source of information and history.

I can appreciate the giving thanks, bit. I definitely like the bit that involves pumpkin pie (and this year pumpkin cake).

So here is a quick list of all the thanks I have to give (which, unlike fucks, are many):

However this holiday started, the good or the bad, I am glad for this opportunity for my wife to have people over and feed them and for my friends and family to enjoy an evening.