Taking My Breasts Back

I’m taking my breasts back.

Not from anyone in particular – I didn’t have them dropped off at a shop to be cleaned or anything. I’m taking them back from my bra. And from society. I don’t need to wear a bra, so I’m not going to wear a bra.

Ancient strophium – basically a band of material around the breasts.

Two things you should know about me when it comes to this. One, I am overweight, but a B-cup. And barely a B-cup. It varies between A and B depending on my weight. So getting a bra that fits is a difficulty in the first place. Bras either don’t fit, or they’re really expensive (and still don’t fit). Basically, I have bra extenders but even then they’re still a bit too tight to be considered either healthy or comfortable.

Two – I do not dress up much. On my better days I’m a tomboy, most days I’m a clean scruffbag. I’ve been like that since I was seven years old. I am more comfortable with my nudity, especially when it comes to my chest than I am in a blouse.

Or shoes, I hate shoes.

But that’s off point.

So I’ve decided to stop wearing bras. It was half a joke on a facebook status my wife made about fixing my washing machine. Two of my stupid bra extenders were stuck in the drain this time (not the first time it’s happened) and now the machine is leaking. I like my washing machine. I do not like my bras. Something had to go.

I tend not to wear a bra at home (I can’t imagine there are a lot of women that do), I never wear it to the village shops either. Cause, screw that. I only wear it when I leave the village – when I go to work, or into town.

Saturday I went to town without it on. Just went in my t-shirt and my jacket and no freaking bra. No one noticed. No one cares. I don’t know why I think they care. There’s some unwritten rule about bras that everyone follows and no wants to. No one is looking at my chest. Okay, some people are looking at my chest – based on the law of averages. Cause I know I am looking at people’s chest for various reasons – I like geeky t-shirts and breasts – but no one bloody cares.

Work was the big thing today. I don’t need the support but damn it’s cold in my house in the morning and my nips need the extra

layer – either to keep them warm or so they’re less obvious. Plus I was kinda nervous about it, cause I did a full day at work, I knew it would be busy and I’ve been conditioned into this idea that I need to wear a bra. So I wore a vest underneath my uniform – which is a thick polyester thing – to take the edge off. The vest made me hot and did take the edge off my nips for the morning. And I think I’ll wear a vest for the rest of the week as I get used to it all. I also took my bra to work with me in my bag just in case I felt like needed it. 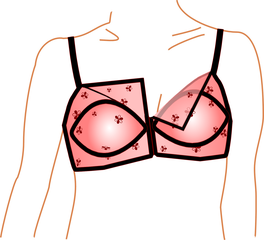 Shutter Bra from the 1950’s – made to hide the cleavage for some incomprehensible reason.

I didn’t. And dammit I was too busy today to even really think about it. I was too warm but too busy to really even be bothered about that. Which is what I like about my job in the tourist months but off point as usual.

So, we’ll see how this goes. As of writing, it’s nice, cause my bras never did fit right, never did feel right. Not for a long time. I don’t need the support. Hell, I need the improved circulation and freedom and just god not having to do something else people are telling me I should do. I hate being told what to do.

Take off the bows and this is my actual bra.

I understand this isn’t for everyone. Some women need the support. Some women want to wear bras but I certainly don’t. It’s my body and I will continue to do whatever I want to it from tattooing to clothing.

It shouldn’t even be such a big deal.

But I think that’s a rant/ramble for another day.