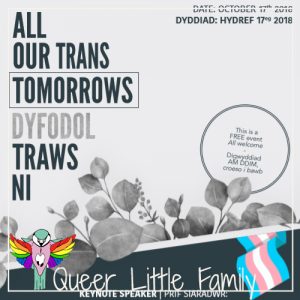 Yesterday I went to my first conference. Ever.

I’m not really a conference person. In that they involve people, strangers, and always struck me as a thing you went to if you had a career or were you know, an adult. Or at least an adultier adult. I don’t even go to cons lets alone conferences. Cause you know, the people.

But this was a transgender conference.

Aber Uni first put on All Our Trans Tomorrows last year and apparently it was really, really good. So, I figured I would go this year. I knew one of the people organising it and she’s amazing. I fall under the trans umbrella and well, I plain just wanted to go. Then one friend and another said they were going, and that cinched it for me. Trans people and friends to go with? Get me the day off and I’m gone.

The opening keynote speaker was Munroe Bergdorf, who was really eloquent in her speech and really interesting. She spoke about intersectionality, being an ally, not just to trans people, but to other marginalised group. She is always educating herself as well as others. How her rights as a trans woman do not infringe on the rights of any other marginalised group. Or any other group at all. I wasn’t sure what to expect from Munroe really, I didn’t know much about her going in except the fact that she’s a model (and fuck me she is gorgeous), but her talk was really good and she was clear and concise and I would happily go to another talk of hers. I follow her social media now. She made an impression.

Shon Faye was the closing keynote and hers actually resonated more with me. It was about female anger, and transwomen and anger. Her journey with anger was a little like mine, and as she said, cis-het men are more likely to hurt other people with their anger (whether violently, physically or otherwise), whereas women, trans women, trans men, non-binary people and to an extent gay men are more likely to turn their anger on themselves. They (we) hurt ourselves rather than other people. Which is partly why Shon Faye started self-harming and is definitely why I started self-harming.

I wanted to tell her that but I couldn’t cause by the time I had the chance I was too tired to be brave. 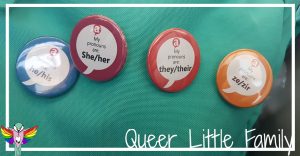 There were several talks to chose from in the morning and the afternoon. I’ll be honest, I chose the talks my friend was going to because I wasn’t sure how brave I was going to or how my anxiety was going to affect me. And also I just couldn’t choose. We went to the Stonewall talk on how to be a good trans ally that good sort of hijacked a little by us. We talked about how the LGBTQ community in rural areas like Ceredigion (and beyond) and how Stonewall should be coming and connecting with us rather than the other way around.

In the afternoon I went to a talk with Stonewalls 2018 trans role model Jack Jackson and his partner Trudy Pease about transitioning in a relationship and that was really interesting. He gave me (us) the best and simplest analogy for being transgender that I have ever heard. He said it was like wearing your shoes on the wrong feet. They still fit, and you can still walk around, for miles even but they just feel off. They talked about their journey as a couple and the effect Jack’s transition had on the relationship. They had been together fifteen years when he started their transition and it was interesting to hear their experience from both sides. Jack was also really nice and spoke to me for a little while later on about my question about being called mum as a transman and as a non-binary person in my case. It’s something I’ll write about later.

Overall the conference was really good and I met some really nice people, cis and trans. People from social services were there, a GP, people from all sorts of disciplines. it was a good cross-section of people. There were pronoun badges for everyone to wear (if they wanted). I wore one of each, cause I’m pronoun-indifferent. I don’t care what pronouns people use for me. It’s titles I don’t like. They also had name badges and were quite happy for you to change them if needed.

There were no biscuits, however. Plenty of tea and coffee but no biscuits. Apparently, ten percent of delegates mentioned this on the feedback form. I may have known most of those ten percent. I was not the individual who demanded cake. 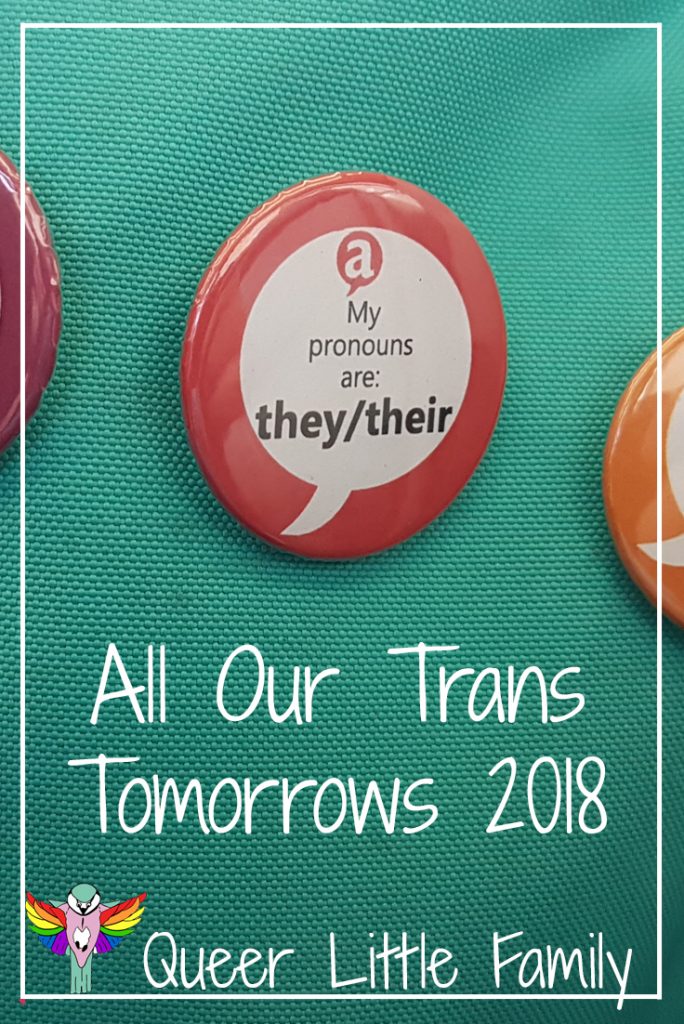