Snappy is a good couple of months into the clingy phase.

I’m not sure how much more I can take of it. Because I’m the wrong mummy.

There are few different reasons why Snappy is feeling so clingy. It’s normal at this age for babies to be clingy apparently, which is fine, sometimes this kid is going to follow a normal development pattern. I just liked the stubborn independent baby better. The happy one who wouldn’t let you spoon feed him.  Not the saddest screaming pterodactyl I seem to have right now.

As well as the normal phase he’s been a little ill now and then; a couple of colds and plenty of constipation. Feeling ill makes us all a feeling a bit vulnerable of course and more so if you’re a nine-month-old with limited understanding of your body and the world around you. If you have a stomach ache all day, of course, you want your mummy to hold you all the time and make you feel better. I just wish he would let me hold him and make him feel better too.

On top of this, we’re about to move house. We’re only moving into the next street but it still means we have to pack everything up and move it all around the corner. Moving house is one of the most stressful things you can do as an adult and I am stressed even though we have a two-month overlap almost to get everything over there I still don’t want to do it. We’ve been here four years and we have a lot of stuff. Snappy has been here his whole life; he’s spent most of his entire life in the house. He was born here he doesn’t know anything else. We’re packing up his entire world and we’re stressed out.

I’ve moved a lot in my life, a couple of times as a kid. It is never a fun experience.

I don’t blame him for being clingy.

Logically I get it, I really do. He’s a baby, he doesn’t know what’s wrong and he can’t express himself much without crying or screaming or doing that thing where he throws himself backwards and cries and screams. I understand this is him expressing himself as best he can or how he can.

Emotionally I’m suffering somewhat in a couple of different ways.

I don’t always have patience for it, for him when he’s screaming and crying. Which is worrying because I’m pretty sure it’ll get worse when he’s older. I don’t have the patience and then I get annoyed and angry and I don’t like feeling that way in general. I don’t want to be angry with him and I shouldn’t be; it’s not his fault. And deep down I’m not angry with him, just a bit annoyed maybe. I’m angry at the situation. Angry with myself too for feeling like this.

I have anger problems though not in a classic sense. Anger makes me feel very unsafe, my own anger included.

The last thing I want is for Snappy to be afraid of me like I was afraid of the angry adults in my life. But then our situations are so different and I’m aware of the effect I have on him.

I try to walk away from the situation. From him. Hand him over to bethend and calm down for a moment. I try to breathe. Or I put that angry energy into singing to him. Or just shushing him

It helps. Me if not him.

Often I get sad and anxious too.

I get anxious because I can’t do anything, and the more worked up he gets the more worked up I get. I get worked up because he seems to upset and I really just want him to go to sleep so I can go to sleep because we all have to get up again in the morning. I’m working six days a week most weeks right now because of staff sicknesses and I’m not going to manage it much longer with the amount of sleep I am not getting.

But I have to and I will.

I get sad because for those moments when he screams and screams and then suddenly stops because bethend takes him feels like ice in my heart. I’m not the right mummy and I’m not good enough.

I know it’s irrational. He loves me and I am his mummy, he knows I’m his mummy. I’m just not the right mummy he needs in this moment. Every day I go to work and leave him all day but bethend stays with him over and over. I know it won’t always be this way but for a little while it makes me sad, and sometimes I get a little too sad and I can feel myself spiralling down; slowly, it always starts slowly but there is always a steep run off for my depression and once I hit it it’s a hell of a climb back up.

I’ve not been there for a while and even though I could feel myself sliding a little the other night I’ve managed to hang on that thread of rationality that lingers in my mind.

Strangely, I don’t feel guilty over Snappy. There is no mum guilt. At least when it comes to him being a clingy bum. I have plenty of mum guilt over other stuff, but not the clinginess. I feel being guilty over that would be the same as feeling guilty over him being tired. Kids get tired, kids get clingy. My sister is still clingy and she’s in her thirties. We used to call her the limpet; she would wrap her arm around my mum’s leg and not let go. My mum would just drag her around the kitchen until she let go. And this went on for years.

So, no, that’s not what I feel guilty about.

I feel guilty because I can’t take some of the burden of this from my wife. He wants and needs her and not me, and I feel guilty that the only solution is to hand him over to her. Even though she’s spent all day dealing with him while trying to look after our house, and pack up everything we own. When he’s screaming and the only thing that stops him is bethend I feel guilty that she has to step up again and she doesn’t seem to get a break even when he’s asleep.

It’s not all bad. Really. Even though we’re all exhausted we’re still happy. He is happy. He laughs and eats his food and he’s feeling better overall. We may have turned a corner this week – two nights in his cot means two nights sleep for us both – but that could change again tonight.

It gets tiring and saddening when all I ever see is a crying baby, but I cling to those smiles and laughs like he clings to bethend. 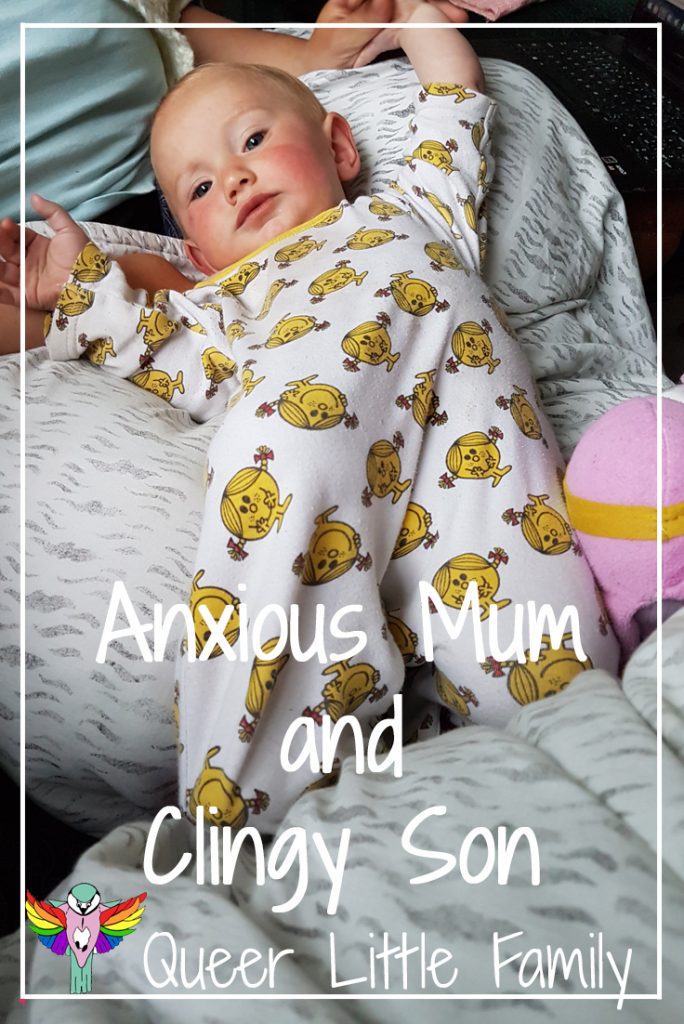