It’s Not Fun Any More: Blackface Is Never Okay

This weekend was the Aberaeron Carnival – my favourite event of the year and one of the times I will let myself get swallowed up in a crowd like that. However nice this weekend was, it was marred for me (and many others) by racism. 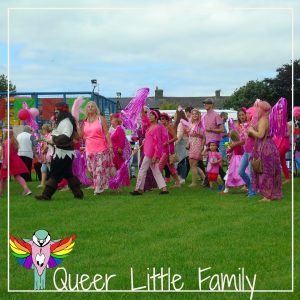 The colour scheme this year was all the pinks.

So, for the carnival, five lads decided to dress up as the Jamaican bobsled team from the Disney film Cool Runnings. They had a bobsled, wore the costumes, all had dreadlock wigs and hats.

All five of them had also blackened their skin so they looked black too. For the uninformed (I was surprised to find there were so many) this is called blackface. It’s racist. It’s always going to be racist I’m afraid. Even if they are portraying black characters they should not have darkened their skin.

Here is a good article about why blackface is offensive and while I hate to sum almost a century worth of racism and history into a few sentences but blackface was historically used to portray negative black stereotypes. Often as a way to reinforce those stereotypes, and have the power remain with the white population and to keep the black population ‘in their place.’

Not only did the black up, but they also played the racist version of the song from the film’s soundtrack. The song is not good. I won’t link it but the tr:dl (too racist: didn’t listen) version – the song is about how all Jamaicans are dirty and poor and have HIV.

All In Good Fun

I’ve read pretty much all 500 hundred comments on Dinah Mulholland – the Labour Candidate’s photo of the and tried to engage with people. okay at first I argued with them because I was still really, bloody angry. And these people were angry that this was even labelled as racism.

Because it was all in fun. That seems to be the main argument from white people and some mixed race people alike. “They were in costume”. “They were having fun.” “What’s wrong with this?” “PC gone mad!”

PC gone mad is always a favourite of mine.

There was also a lot of abuse hurled around – most at Dinah Mulholland, some at me when I tried to wade in and educate people.

Because I think that most of this is about ignorance over actual intentional racism. But ignorance isn’t an excuse in 2017. We have the internet, this information is available easily but a lot of people didn’t even know what blackface was, let alone why it was such a problem.

And I understand that I really do. And I’m even willing to entertain that these lads are not racist – just young and stupid but I can’t get over the fact that this is racist and I can’t get past my initial revulsion when I saw them.

One argument some people tried with me is that I’m white. Very white. Like just thinking about the sun can burn me. Does this mean I can’t be offended by racism – considering I have white privilege? No, no it does not.

The best example I can do to explain why not is this: I am queer (bi, gf) and if there had been homophobia in a float I would be furious about it. And I would damn well expect my straight/cis friends and family to be as furious as I would be.

Another argument is the question of whether ‘whiteface’ is a racist. Stating whiteface as an argument is the equivalent of saying “why is there no white history month,” and “We should have straight pride.”

Whiteface is a form of racism, but against black people, not white people because it’s historically been used to assimilate black people into white cultures against their will, and forgo their own cultures. Whiteface is extremely damaging to black and especially Asian cultures who see white skin as an ideal and making young women especially feel bad about the natural colour of their skin. Many people go to extreme lengths to whiten their skin and end up causing damage all because our skin is perceived as the perfection – something we are to blame for by colonising the world and in turn forcing native peoples to give up their culture and become white.

Here is a good article about whiteface.

What is The Difference Between ‘Fun’ and ‘Racism’?

This was a genuine question I asked of people but didn’t get a lot of replies to. Even from people who seem to want to debate the matter (without insulting me or after insulting me).

When does ‘it’s all in fun‘ end and “f*** me that’s racist” start’? How many comments are racist and homophobic and then brushed off as a joke? How often do we let people do stuff that is racist because it’s all in fun and there was no racist intention?

Should intention really matter? If someone was offended, then that’s the end of the discussion surely? And people were offended. So intentional or not you’ve been racist.

One person who did talk to me about this and answer my question talked about intent and that the line between fun and racism is wherever you put it. I understand that I do, and my line is way further down than many of the people having a go at Dinah Mulholland (and me).

I think I can see the reason for that too.

So you know where I’m coming from this is some of my background, I live in a rural Welsh community on the edge of nowhere Wales. I moved here when I was ten from Coventry, and after living in Leicester for almost a decade I returned to this community. When I originally moved, back in the early nineties – there was one black family and a Chinese family in my area (that I knew of). Growing up in Coventry my best friends were Donna – a white girl like me and Bushra – a Muslim girl. Coventry and Leicester are both very multi-cultural cities. When I moved to Leicester there was a huge influx of Somalians. When I left the Polish were moving in.

I loved it and I miss it. I may not like living in cities (or visiting them) but I miss the multiculturism of them.

It’s in this that I understand there is definitely some disconnect on how I see this as racism and some may not.

Blackface is never okay. It is always racist.

And you never change my mind on that.