I Fell Out Of My House 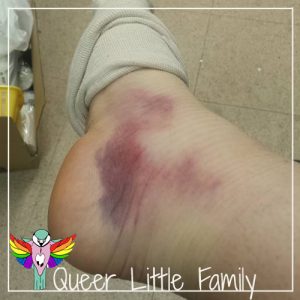 I am a little accident prone.

Okay, so more recently this has become very accident prone.

In the last three weeks, I have fallen over after getting my laces trapped in the back door (stupid), cut my thumb while trying to slice open a pitta bread (a bit daft) and then yesterday fell over leaving my own house. Not by tripping over my laces – I learned my lesson unbelievably – to be honest, I’m not sure how I did it but I feel really stupid.

Especially as I’ve now sprained my ankle quite spectacularly. As pictured.

Long story short I fell out of the house.

Short story long, I didn’t feel up to going to the beach Saturday afternoon after work. It had been a long week and I mostly wanted a nap and a laze around. My plan was to go Sunday, we’d burn a lot of wood, make smores, have a laugh. So while I was napping, my wife and nephew were working in the yard and they let Reb Brown out on his lead. The lead is attached to a long cord and attached to a pole in the ground (I have one of those umbrella style washing lines).

We do this so he can’t get out of the garden. And we do that for a couple of reasons. When we first took him in, he was in pretty bad shape – the vet told us he’d lost a fight with another cat, that he would continue to lose fights until he died and he was better off indoors. Also, he had cat flu and bad eyes. The flu is gone but his eye will never get better – at the moment all we can really do is keep it clean until the time comes when it needs removing. So we had him fixed and took him in. But he likes the outside, so like our old cat Micky, we got him a harness and a lead and take him for walks in the park or let him in the garden.

So, later on, we went to get him out from the garden and he wasn’t there. He’d slipped his harness and got out the garden.

We grab the cat biscuits and the put the torch on my phone (cause we don’t have an actual working torch right now), and looked in the backyard looking for him. No sign of him so we go out the front.

I got as far as the driveway.

I’ve lived in this house for two years now, and I know there is a front step. I still went barrelling over it, spraining my ankle and grazing my knee. I lay on the floor before my wife helped me in the house, as I cried my eyes out (I don’t have the highest pain threshold) and my nephew, my hero, took the biscuits I hadn’t spilt all over the driveway out onto the estate to look for my cat. In the dark. In the village there aren’t as many street lights as there are on city streets and bless him he’s not keen on the dark and suffers from anxiety too. But he went without even thinking about the dark, my wife joining him once I was on the sofa. 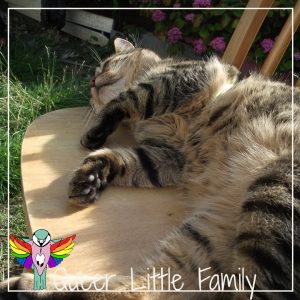 They wandered around the estate calling for him and offering biscuits, which attracted another random cat (there are a lot of cats in my village). They headed back to the house and found my stupid cat in the driveway eating the biscuits. When they brought him inside they ran straight to the kitchen to the chicken waiting to be eaten.

It was long past his dinner time after all.

So now I’m limping around the place, slowly. I had the doctor check it, but it’s just a sprain. An epic sprain (my words, not his).

It’s just a long line of accidents and slip-ups. I have a bruise on my head from hitting my head on the metal draws at work. I hit my head on the at least once a week or so. I catch myself on door handles and hooks. Trip over cats (though that’s more because they’re awkward and stand in the way). Catch myself on corners.

I drop stuff. All the time. As the week goes on the more stuff I drop. I know it’s Saturday by the sheer amount of stuff I drop. Mostly stuff in boxes, but I have broken two bottles of cough medicine and some Olbas oil. It’s pretty annoying. Cough medicine is sticky and bloody hard to clean up.

I wake up with bruises. When I was a teenager I was convinced I was being kidnapped by aliens. I may have been obsessed with the X-Files at the time too.

I don’t mind so much sometimes. Bruises and broken bowls (broke one yesterday) aren’t really a big problem (unless it’s the last bowl and I have soup for dinner). But it does make me feel stupid and I definitely do not like feeling stupid. I worry that people don’t take me seriously and people have treated me badly in the past, like I’m a child (I’m 33) that can’t look after myself and once thme an idiot. Or any less capable at my job. Or able to look after myself and my wife and my animals. And in the future my baby.

It passes through, these things do and I’ve learnt to be a little more careful coming out the front door.

On to the next adventure.