March was a good month, a bad month and too bloody cold. Between the snow, my wife getting permission to stay in the country indefinitely but my depression hitting a low, it’s definitely been a weird month.

We’re still working our way through Bones, though it’s not as good now we’re into season nine as those first four seasons. It’s gotten a bit bonkers too, but we’re sticking with it anyway it seems. We’ve also started Season Ten Of RuPaul’s Drag Race – loving the drag queens already this season. It’s on Netflix so check it out.

I’ve read nothing. It happens, I got through periods where I don’t read many books. I read a lot online, the news, articles and blogs, but no books. With my son, we’re working our way through the Mr Men books Grandad Phil got Snappy last year. We’re about halfway through and he loves them a lot. My wife has worked her way through a small pile of books as usual. Including The Adventures Roderick Random – which was first published in the 18th century.

Stardew Valley has been set aside for Ni No Kuni II which came out at the end of the month and I love. I’ve not played the first game but watched a Let’s Play of it with my wife. It’s so much fun so far. We’re also about halfway through the Colossus of Shadow Of Colossus too. And Pokemon Go – still playing a whole lot of that. 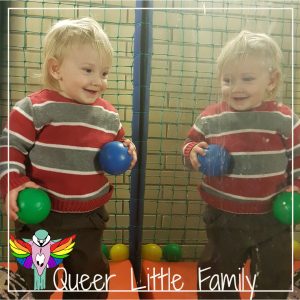 We went swimming for the first time in months last month. Snappy didn’t enjoy it as much as he had in the past but he wasn’t hysterical upset just grumpy. We’re going again this week with his cousins so hopefully, we’ll have more fun then. We also had an Easter Egg hunt after church and have been to soft play a couple of times in the leisure centre. It’s perfect for toddlers, as it’s small and perfect for mums cause it’s cheap.

Last month I’ve written quite a bit for another freelance client and set up a proper portfolio for people to peruse. I have also written a couple of pieces on Medium that are getting a little traction. You can check them out there. I also joined an LGBTQ writing workshop last month, and it’s NaPoWriMo this month!

My wife finally got her Leave To Remain – this has been a huge relief for us and you can read about it here. I also have a broken laptop, been off work sick for two weeks, and Snappy had to go to A&E for the first time with croup. Busy month.