As you may know from some of my monthly entertainment round-ups we are huge RuPaul fans. RuPaul’s Drag Race has come a long way since it started and in January the third season of monthly entertainment round-ups starts. All-Stars is a shorter series with queens from the previous seasons of Drag Race. It’s available on Logo, but seasons two to nine is available on Netflix right now.

It is the best thing on television right now. Not even Game Of Thrones can top the drama and backstabbing of Drag Race. It’s funny, gorgeous and the only thing you’ll want to watch once you get started.

This is a brief primer for the show because it’s like stepping into another world with a language all of its own. Do you know what tucking is? What’s the tea and what the shade? No? Let me help. And don’t google tucking without reading this first – I cannot be responsible for the results.

RuPaul is the supermodel of the world and has done pretty much everything. She hosted radio and chat shows and came into her own as a pop star, model and television presenter;  Her full name is RuPaul Charles and doesn’t care whether you refer to her as he or she. She has better legs than anyone else I know on television and is always, always perfect. Even out of drag. She is the mother of drag and you will love her. RuPaul is fierce and fishy and afraid of nothing. While she may never be a mainstream hit she’s the darling of the LGBTQ scene though not without her controversies of course.

There are a few different regular judges over the course of the nine years and a lot of guest judges. Merle Ginsberg was a regular judge on the first season and returns as a guest. Michelle Visage takes over her spot after that for the rest of show. Michelle Visage is every New Jersey stereotype I’ve ever seen rolled into one pair of massive breasts. She’s my favourite. Santino Rice is a fashion designer and judge until season six. He gets skinnier and skinnier and then disappears. We were worried for a while but he’s fine. Billy B is a judge for seasons 3 and 4 and kinda forgettable even though he’s in every episode for two seasons. Finally, from season seven on we have Ross Mathews who is hilarious and Carson Kressley. One or the other or both are judges and bring something different to the table.

The Queens are mainly American, with a Puerto Rican or two thrown in each season and an Australian or a Brit now and then.  Most are cis gay men but some are trans women who have come out during or after the show. You will form your favourites those who really make an impression for one reason or another. Perhaps they’re hilarious, perhaps they’re just sweet, perhaps you just like them. I’ll talk about my favourite Queens at a later point but for now, you need to know about the different kind of queens:

Comedy Drag Queens are supposed to be hilarious and most of them are. They have a talent for it and focus on that over anything else. They’re not always the prettiest or the nicest. Often they get called out by judges for their lack of style or fashion but they’re my favourite kind of queen, to be honest. The Queen of comedy queens is Bianca Del Rio. They have their origins way back in the 20s in Vaudeville.

Club queens have their origins in the gay clubs of New York and while all drag is an art form – club queens take it that extra bit further. They are art and more avant-garde than most queens. It’s something special to see what a club queen can do with some scrap fabric or some rubbish. Though it doesn’t always work out as they envisioned, and the judges often call them out on unfinished ideas, or being over the top or flying under the radar. My favourite club queen is Sharon Needles.

Like Comedy Queens pageant queens are exactly as they sound. They’re beautiful and poised, and while some are funny, and some are dancers or singers, they are all pageant contestants. Yes, there are patents for drag queens. Pagent queens are usually in conflict with Comedy and Club Queens, they often stick to what they know and the judges want queens to step out of their comfort zones and their perfect pageant dresses.  I’m not a huge fan of pageant queens but I do like Alyssa Edwards but mostly cause she’s a bit bonkers.

The runway is the main stage of the competition. Not only do the Queens have to walk down it at least once an episode (usually more) in their best outfits that they’ve made or bought that fits the theme of that week but they have to do other performances too. Live comedy, dance routines sing and lip sync for their lives in front of the judges. I think it can be quite intimidating to walk the runway – it’s one thing to do it in front of hundreds of mostly strangers who’s criticisms you won’t hear but it’s another thing altogether to walk down a runway knowing you could possibly be ripped to shreds afterwards. I think you can tell which Queens are going to go far by the amount of confidence they have when walked a runway. Not arrogance, confidence. 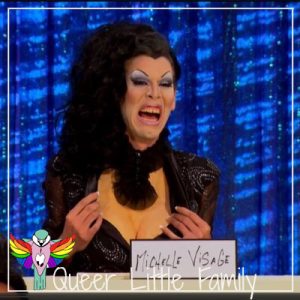 Snatch Game is based on the popular game show Match Game, or as we call it here in the UK Blankety Blank. While it doesn’t exactly stick to the exact format it has become one of the most important features of the show. Once a season the queens impersonate a famous person and take part in the Snatch Game. The contestants are guest judges and it’s about the comedy factor, not actually winning the game.

There are have been some great impressions and some really brave ones, including Sharon Needles as Michelle Visage, Bianca Del Rio as Judge Judy and Jinx Monsoon as Little Edie. The thing some Queens forget about snatch game is that the person you have to make laugh is RuPaul. So while the queens sneered at Little Edie and choose Katy Perry or Ke$ha cause they’re famous, she is of the generation of Grey Gardens. She is the one you have to impress. Queens who fail to make RuPaul laugh fail to make it to the final.

Lip Synching is a Drag Queen’s bread and butter so to speak. It’s one of many ways Drag Queen’s entertaining. Lip-synching to a song and making the performance your own. On Drag Race, queens have to Lip Sync to stay on the show. Some weeks have a theme, many weeks the songs are by one of the guest judges, just to add that extra layer of drama. Imagine performing a Janet Jackson song or a Lady GaGa song…in front of the Lady GaGa. You may not be making any sound yourself but your movements and performance are doing the talking and they have to be on point. A death drop will not always save you.

There is a lot of a language on the at is really unique to Drag Queens. Here is a quick rundown of some of the more regular words and phrases you need to know.

There’s more but I think that is a good starting set.

So you’ve got a little time to get some binge viewing in before it starts. Let me know what you think and who your favourite Queens are! 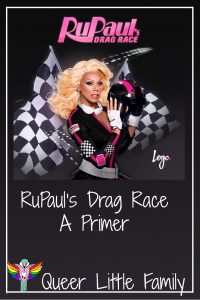