July passed pretty quickly – too quickly because already it’s August and we’re heading on holiday on Sunday! And then my son is on in two weeks. It’s been fun in places, stressful in others but at least we’re finally settled in the new house. 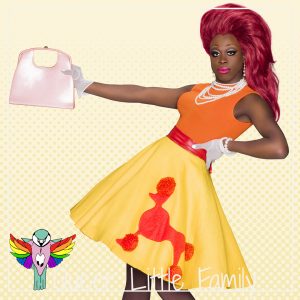 This month we finally, finally caught up with Steven Universe. We hadn’t been putting it off, but it was a case of, ‘hey have we downloaded SU? No, oh I’ll get right on it’ and then…I get distracted and don’t. So finally sorted all the episodes out on the hard drive and we watched from the beginning again. Now we’re caught up and have to wait for the next Steven Bomb. We’ve also been watching RuPaul’s Drag Race. We had fallen behind with it, so now we’re watching it backwards starting with Season Nine that had Lady GaGa in it and then Season Eight which was epic. One of the best seasons. Walk into the club purse first.

Bethend finally finished Moby Dick and has moved on to Carpet People by Terry Pratchett and Chrysalids by John Wyndham. She’s probably got another couple of books on the go as well right now. I’ve been reading Revolting Rhymes by Roald Dahl to Snappy. I’ve been reading Dragon Age fanfiction.

We’ve moved on from Lady GaGa, to RuPaul (cause we’re watching the show) and some Girls Aloud. Cause why the hell not.

Finally managed to get my hands on a PS4 so I’ve been replaying Dragon Age Inquisition cause now I can play the Trespasser DLC!!! Woo-hoo. Literally, that’s all I’ve played this month on my PS4 but I’ve always been playing the beta version of Little Alchemy 2 on my phone. Loving it so far, and the original was already pretty awesome.

Wrote a poem this month, just the one, but I’ve been submitting stuff to Pride Zine and tried to write some more fiction. I also wrote some Dragon fanfiction. Some smut and some gen fic. It happens from time to time. The genfic, not the smut. I write smut all the time! 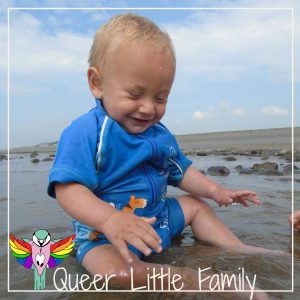 This month, we’ve been to the beach for the first time in ages, and the first time in Sumer. Snappy ha. s been to the beach before but usually in a pushchair or a car seat. This was the first time he really got to crawl around in the sand and go in the sea. He loved it, we thought he would be upset about the sea but he really enjoyed himself. We also went to Soft Play for the first time and after a rocky start (and some beans on toast) he had fun. He liked the slides the most I think. Both nights he was hard to get to sleep; after soft-play he didn’t go to sleep until 11. We also went to the village carnival. The playgroup had a float that came second and then Snappy in his spider outfit came second in the fancy dress competition!

As well as all this, I got promoted at work for a three month trial as a pharmacy manager. It’s been pretty stressful cause we’re so short staffed but I think I’ll have that sorted enough that I can go on holiday and not have anxiety induced nightmares about the place burning down without me.