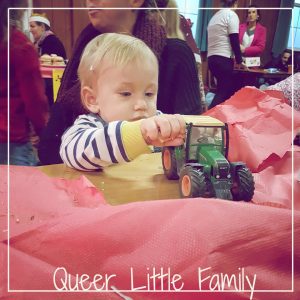 At the fete before hand.

Last month, we spent our first night apart from our son.

I have to admit it was easier than I expected it to be.

So, this year for our works Christmas dinner we decided to take partners for the first time. Husbands, wifes, partners and so on. My sister agreed to take my son for the night and we needed to start doing some practise runs because we going to see Bianca Del Rio in July in Birmingham. An overnight stay without my son about 140 miles away. 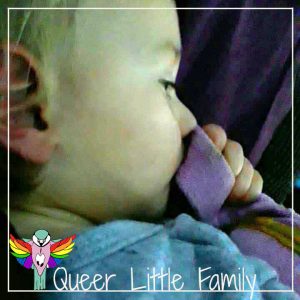 He was fine. He had his Peebles.

We had dinner in the same town my sister lives which meant if anything was wrong before we went home we weren’t too far. I didn’t think anything would be wrong, we sent him with a box of stuff including some calpol because he was at the tail end of a cough and cold. He had nappies, pyjamas, clean clothes and his Peebles. What more could a bubby want?

Apparently not. To be fair though his clinginess has been improving slowly over the past few months and if we’re not in sight he’s fine. So he was fine at my sisters’ house. My niece climbed into his cot with him and read him a story, he fell to sleep in my sister’s lap and woke up after my nephew did.

My sister dropped him off around midday and he was happy,  He loves his cousins a lot, so I knew he would have fun with them.

We had fun too. 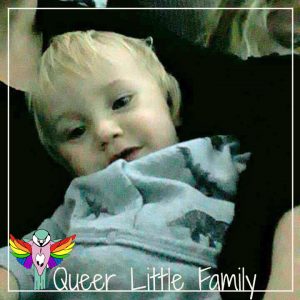 A proof-of-okay picture from my sister.

Bethend and I don’t go out much; not because we have a kid we’ve always been like this. We went out once, met each other and that was it really. Though we tended to go to the cinema more before we had him but I digress.

Dinner was nice, good food, fun, lots of laughing and chatting. I even had a couple of beers (I don’t drink at any other time of year). We were exhausted by nine pm and ready to go home though. And then when we got home it was too quiet at first. Even when we put the telly on. Even though we were tired we ended up staying up till one am watching tv and playing video games.

I spent most of the evening asking my wife if she thought he was okay. Which was what I did the last time he was babysat. I usually text at lunchtime to ask how he is too. So I knew the answer, he was fine, but I still had to ask.

I also text my sister a couple of times And demanded pictures.

We got up at our normal time the next day and again the house was too quiet.

No crying or chatting. No laughing. It was weird.

I didn’t like it much. I hadn’t slept well the night before – went to bed too late and I don’t always sleep well (and perhaps knowing he wasn’t in his room made it worse?) – so having no snotty kisses the next morning didn’t go down too well. 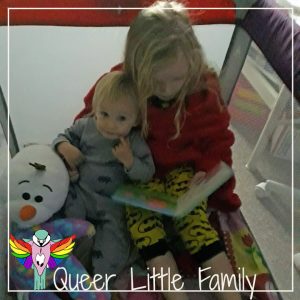 Poppy reading him a bedtime story.

And we were fine really.

I’m not really one for the idea that I’m ‘supposed to feel’ anything. Everyone is different, everyone experiences the world and their own emotions differently. How I perceived our first night apart from my son will be different to other mums, will be different to his other mum. That’s okay though, that’s how people work. I admit I thought it would be harder, I thought I would worry more, but when it comes down to it I trust my sister. I know my son and I know how much she loves him and how good a mum she is to her own two kids. We may be very different people with different parenting styles (to be fair, ours is just quieter to hers) but we both love our kids and would do anything for them, and for each others.

Plus she trusts me with her kids all the time.

For now, it’s done, another milestone for the mummies and Snappy and onto the next adventure.

Next time, perhaps I’ll sleep better but until then at least I know he can stay overnight with my sister without any issues.

What about you? How was your first away from your kid? Hard, easy, a relief?