I’m not really knowledgeable about milestones, which is daft because I did it in college for a while but I’m more interested in his individuality than what targets his hitting. He’s a baby not a statistic. So here’s Snappy at six months:-

He had his six month check up at the health visitor this week. I don’t get to go to a lot of his appointments, cause I’m a work, but I was able to go to this one. She’s was pretty pleased with him and wasn’t as upset over being striped naked and measured like he was the last time I went to one his health visitor appointments. He’s still between the second and ninth percentile for weight, pretty steady – he’s fourteen and a half pounds now. She’s happy with his progress though and we talked for a little bit about how he’s feeding and the milestones he’s reaching.

Snappy may only be six months but he wants to walk. He has no interest in learning to crawl and h actually can walk as long as you’re holding him up. He grips your little fingers and can manage to walk quite far. It always looks a bit like he’s dancing sometimes, he’s quite wobbly and cannot support himself on his feet unless he’s holding on to. He can pull himself up, and can stand holding onto something. I want to get him a little wooden push walker for him so we don’t have to walk him around the house all afternoon every afternoon.

The cats are in big trouble when he is walking though.

He’s very vocal and babbles a lot to himself more than anyone else. That’s how we wake up most mornings, hearing him talking to himself or his dolly Peebles waiting for bethend to wake up and feed him. It’s really funny to listen to. He screams too – makes a noise like the happiest pterodactyl. He alternates between classic baby laughing and screaming when he’s happy or when I’m tickling him.

We’re working on weaning him right now, have been for a month now. He has mush every morning of various types of vegetables and fruits. Sometimes mixed together, almost always mixed with a bit of peanut butter. I bought him some rice crackers this week to try though he wasn’t thrilled. He really likes tea (I let him suck it off my finger) and chewing on bread.

He wakes up for feeds twice a night and has two naps a day. I put him to sleep any time between Six and Seven in the evening depending on how the naps went. If he didn’t sleep well during the day it’s closer to six. On Tuesdays I don’t get home ’til half six, so I put him to bed around seven so I can still spend a little time with him. He almost always has his morning nap. Some nights he wakes up and talks to himself and is uninterested in feeding until I distract him – usually by changing his nappy. I sleep pretty well, cause I can sleep through anything (I once slept through a fairground) outside my flat.

In typical Snappy style, he has a tooth coming through – but the very back molar on the right side. Not a front one, a back one. He can’t do anything normally. It might not be the first tooth to actually come through but it’s definitely the one that bothers him. He likes to chew on dried mango (well he likes to chew on everything) though when it’s really bad, and we have teething gel. 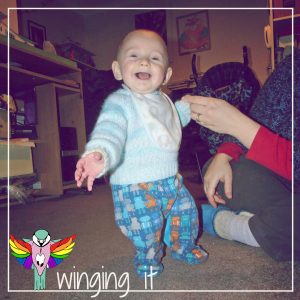 I think we’re all doing pretty well as mummies. It’s not easy, I never expected it to be, but we’re managing. We’ve both struggled a little with some post baby mental health problems, but we’re getting there you know? He is fine though, the happiest baby in the village, and he makes me happier than I could really imagine. His little smile lights up my day, his big smile just makes me want to sing.

Some times I still can’t believe we made this little thing, let alone have him for six months. I never thought I would be at this point in my but that’s another post. My wife is a great mum and I think I’m really lucky to have both of them in my lives.

Can’t wait for the next six months.