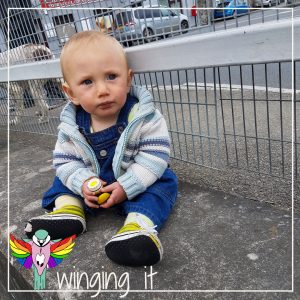 Snappy is nine months old on Sunday. We’ve officially had him for as long as bethend had to carry him. She is definitely still feeling the effects of that but it doesn’t seem to have put her off having another one. Or me. As long as we have it at a hospital next time.

And she’s happy with my little boy’s progress.

He actually slept through most of her visit. He’d woken up at five this morning (it seems to be his new thing), and by half nine he was snoring on bethend’s lap while we talked to Carol about him. She wasn’t going to weigh him because he was asleep and that actually says a lot about her confidence in his health. If she had been worried she would’ve weighed him regardless of whether he was asleep or not.

Fortunately, he woke as she was about to leave and seeing as had dressed him in preparation to strip him, she weighed him.

Snappy’s still firmly in-between the 2nd and 9th percentile. He’s little yes, but he has long legs. He’s only just grown out of the last 0-3 babygro of all things and most of his clothes are 3-6 right now. But bethend is short and the donor isn’t a tall guy so I’m not expecting great height from him.

He’s eating enough that’s for sure. In fact this week alone he’s been eating more than ever and has only had a bedtime feed from bethend all week. He seems to be weaning himself which is nice of him. He’ll try anything, especially if he can do it himself and he has a couple of different cups he’s really good with.

Breakfast is always fruit and yoghurt. This week’s fruit has been peaches. Lunch varies though he’s discovered the joy of baked beans and has those for lunch. Dinner is whatever we’re having but a baby-friendly version or ‘chips‘ – basically vegetable chunks. Sweet potato, beetroot, whatever we have in the house.  He has a figgy roll as a treat and bits of whatever we’re having. 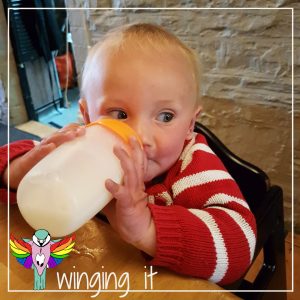 The only thing the health visitor didn’t want us doing was giving him cows milk because he’s only nine months. The advice is no cows milk as a main drink until he’s a year old. She suggested formula. We’ve decided that he’s fine.

If he had an allergy it would be obviously by now. He reacted to the apple he ate within a few hours, and the same for the red and yellow peppers bethend had eaten one dinner time. Formula is so expensive and it just has a bunch of extra vitamins in it. He can get those from his diet or from vitamin drops (which she suggested at six months but we didn’t bother with either). He eats more veg in a day that I do most weeks sometimes. If he were sick a lot (you know more than usual for a kid) or losing weight maybe I’d worry about it and get him the bloody formula but minimum wage didn’t go up enough for me to pay rent and feed him expensive milk. I can get four littles for two quid of regular milk and he likes that just fine.

He drinks water too, during the day. Milk is for breakfast and dinner, and then mostly for in cafes or out and about.

He is crawling everywhere. Once he figured it out there was no stopping him. Snappy can walk with his pusher (best fifteen quid I spent) for ages. He walks around while his friend Tommy rides on his little plastic bike shouting ‘Biking!’. He loves walking and can be crying and squalling but if you stand him up with his walker you can guarantee a smile from him.

He’s definitely trying to talk to. I swear he can say yeah and hey. And mama. He’s talking all the time, to himself, to the cats, to his Peebles and monster. He’s trying to copy people too. Saying buba when people say bye bye and making ha sounds when people say hello. He communicates well, slapping his hands on tables and his high chair table is ‘feed me now‘, patting his crotch is ‘change me‘, saying ‘da da da‘ loudly means he wants something to stop or go away.

He reacts to the word ‘paid‘ (pronounced pied) which is Welsh for don’t, even when we’re saying it to the cats.

I’m always amazed at how easy it is to figure him out sometimes.

Just today he said his first word, clear as anything.

Stink is the nickname of our cat Seymour. And while I’m not surprised it was cat related, I am surprised it wasn’t meow or something. According to bethend, he saw Stink, said his name then pulled on his ears. 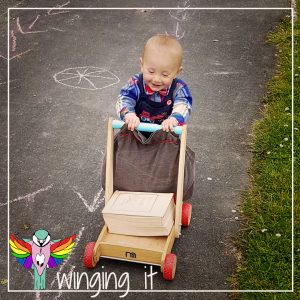 I’m always amazed at how hard it is to figure out what the hell is wrong too.

I expected the clingy phase, people mentioned it and my sister is still firmly in clingy mode (we used to call her the limpet when we were kids). I knew it was coming but I didn’t realise how hard it would be on bethend during the day and then how hard it would be for me when I got home in the evening.

Some days she can’t put him down. Not unless he has food to eat. Which means she gets nothing done and I know she hates that. I don’t expect anything of her – I mostly just want them both to be happy and fed – but I know it bugs her not to get any housework done. I always try and hoover at the weekend, fold the laundry and anything else she asks of me but she doesn’t the bulk of it. Always has, to be honest.

Plus it means she gets less rest, less sleep and carrying Snappy around isn’t easy. He’s over seven kilos now, and she still has shoulder problems have the accident a couple of years ago. It all adds up, takes it toll. When I come home in the evening I want to be able to shoulder some of the burdens of being the mummy – literally sometimes – but he won’t let me. Some evenings I can even to get him to stop crying let alone sleep.

I find it very frustrating and I try not to take it personally; it’s just a phase, he’s just a baby, I’m just not the right mummy right now but I do feel a little sad.

Especially if I can’t get him to even stop crying. Especially when I only ever see him sad and clingy and grumpy because it’s nearly dinner time or bedtime and I’ve been at work all day.

Liked this? Nominate Winging It in the BIBS.