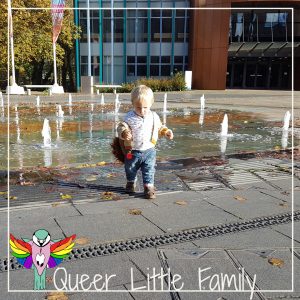 Now you might not think Coventry is really a place anyone would choose to go on a day out – and you would be right, to be honest. It’s an odd place that has always had an odd reputation. It’s currently in the middle of a transformation in the centre as the city becomes more of a student city. The university is growing in both size and reputation, and student living is definitely taking over. It’s a bit surreal for someone like me who only visits the city every couple of years (if that).

I grew up there and moved to Wales when I was ten. In the last ten years, I’ve visited sporadically because it’s a long train trip from here and I don’t always want to go.

We went this time around because we were in Birmingham anyway for Bethend’s Life In The UK test and I knew I wouldn’t get a chance to see my dad before Xmas because of work. 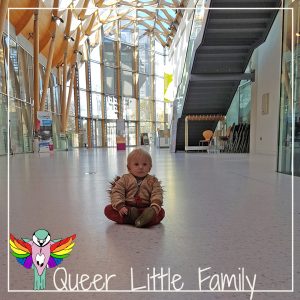 So once we were done with the test we hopped on the train from Brum and stayed the night in a hotel in the centre before meeting up with my dad the next day.

We originally planned to go to Coombe Abbey – a country park and house on the outskirts of Coventry that is free and gorgeous and I love it. However, I had mistimed the buses and my dad doesn’t drive and with hindsight, it was probably for the best. My dad has Parkinson’s and it’s starting to affect his legs.

So instead we went to the Transport Museum, the Cathedral and The Herbert Gallery and Museum.

The Coventry Transport Museum is in the city centre and is free. I hadn’t been since my sister and I took my nephew when he was six. He’s fourteen now so it’s been a while. It’s not moved since I was a kid but has had a makeover and is set in what’s called Millenium Place next to an odd bright, a sculpture and what was a cool international clock in the ground but doesn’t actually work anymore.

Admission is free. They open at ten on a Sunday and we were there at five to. The first display you come across is a motorbike.  As you head into the museum there are huge displays of bicycles. The museum is mostly about the history of transport production in the city. It has a great section on the world wars and a Blitz experience walkthrough. One thing Coventry is known for is the damage it took during the second world war.

My favourite stuff is still there. They have the tour bus from when Coventry City F.C won the F.A Cup in 1987. I was only five so I didn’t get to go to Wembley but my dad took me and my aunt to see the team parade on the bus. They also have both the Thrust SSC and the Thrust 2 that broke the land speed record.

My son enjoyed walking around the place. He liked any of the exhibits that made noise and any of the yellow cars. Also he had a  ride on a little train that he liked. He’s never been on a ride like that before. 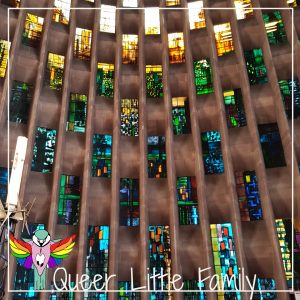 The city took a lot of damage during the blitz; there’s actually a little video about it in the transport museum and how it was rebuilt. Part of the rebuilding was a new Cathedral. The old and the new now sit side by side just up the road from the transport museum. The old cathedral is pretty much just a shell of what it was. The roof completely caved in – they had recently done some work to reinforce it and due to the extra weight it pretty much came down in one go. The spire is still standing and you can currently climb it. We didn’t – it’s a long climb and we had the pushchair.

The new Cathedral costs six quid to get into unless you’re attending a service. I’m not religious but I’ve been a couple of services there including midnight mass and it’s a pretty spectacular experience. It’s not something for my son to enjoy I will admit but I knew my wife would really like it. Plus I haven’t been for a long time.

From the stained glass to the organs, the new cathedral is stunning. I’m not in any way religious but you don’t need to be to appreciate it. the entire building it a work of art. Even my dad likes the cathedral. My son spent the entire time shouting so he could hear his own echo but luckily there were no services so we weren’t really disturbing anyone.

The Herbert is another Coventry institution that’s been around since I was a kid and I don’t think I’ve been there since I was a kid. It’s right across the courtyard from the Cathedral and free. Since then it’ undergone a huge refurbishment. It’s still in the same place but twice as big, twice as shiny and twice as awesome. They do a lot of stuff for little kids, and the museum is very interactive. Snappy really enjoyed running around the place and touching anything he was allowed to touch (and some things he wasn’t of course).

The museum is about life in Coventry, and how people would’ve lived their lives from the medieval times when Lady Godiva was still around to the present day. There’s a lot of places to sit too; my dad definitely appreciated that.

We didn’t go up into the art gallery section, my dad was pretty tired by that point and we needed to head to the train station at home by the time we’d done the museum bits. It’s definitely worth another visit though, it’s changed a lot since I was a kid and I was glad to go. 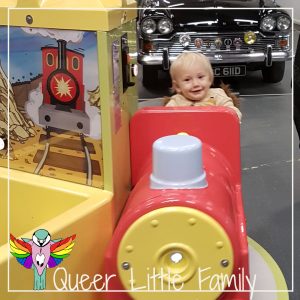 There’s a lot of shopping in Coventry; West Orchards is the shopping centre and part of the city centre was revamped so it’s sheltered. The statue of Lady Godiva and the Peeping Tom clock are in the centre too – the clock runs on the hours and you’ll be able to see little Lady Godiva and Peeping Tom. A little further out there is the Belgrave theatre and just a short walk beyond that the SkyDome houses an ice rink and cinema. Coombe Abbey is on the outskirts of Coventry and there are plenty of parks, pubs and restaurants including the War Memorial Park.

Have you ever been to Coventry? Let me know what you enjoyed the most. 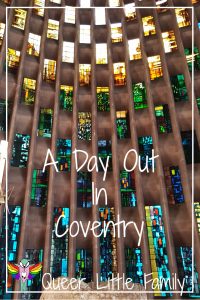 38 Replies to “A Day Out In Coventry”