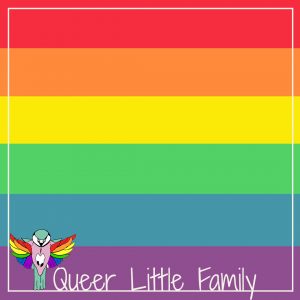 Three things you need to know going into this post:

I will not be using this reaction button or even liking the page you need to like in order to get it.

Okay so to be totally honest I tend to rally against anything popular or fads. I’m a bit awkward like that, if it’s popular then odds are I’m gonna get annoyed with it. It sounds a bit hipster but there is something in me that really hates this sort of thing. I’m not sure why I think either I’m awkward, or because I’ve been a bit of a social outcast all my life that it’s bled through into my adult life in this way.

I might just be an arsehole though and with some stuff, I tend to get into it months later anyway.

Pride Is Not A Fad

This facebook pride reaction – a tiny rainbow pride flag to go along with the other emojis – is a fad. People like it because its facebook, because people like pride, because people like gimmicks. There’s nothing wrong with any of those things except that pride should not be a fad. It shouldn’t be something you bring out for June only to file it away again in July.

Pride never ends. All day, all year, all your life. Even if you’re in the closet your supporting the community, the movement, the life in some way. Anonymously on the internet, refusing to shop or eat at places that known to be against LGBTQ rights.

To top it off, you don’t get it automatically. You have to like a certain page beforehand. Wouldn’t want any poor homophobes to have to suffer with a pride flag to choose from. 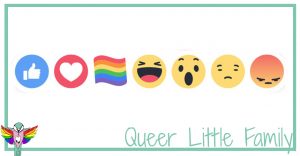 This is just another way to get on the good side of the LGBTQ community without actually doing anything. It’s pandering pure and simple and that’s really why I won’t be signing up.

If Facebook really wanted to do something to support the LGBTQ community they would work on their Community Standards instead. While they seem to have gotten a little quicker in dealing with reports they don’t seem to have gotten anymore consistent. I’ve reported posts for everything, graphic violence, pornographic content, racism and of course homophobia.

Another problem is that facebook are still failing many trans users by forcing them to use names they no longer identify with. Or in some cases banning accounts of trans people who’ve used the names and genders they want. Despite Facebook changing their policy in December 2015 it still isn’t enough.

I understand some safeguards need to be in place but the fact still remains that facebook requires a lot of documents to verify names that a lot of transgender people don’t have for various reasons. Documents are either costly or time-consuming to get and it’s not always possible for some people to get names changed.

It also forces people to come out if they have to get real-life documents to prove their online identity. Before they may be ready to come out to family and friends.

Thanks But No Thanks

A pride reaction does nothing to make of this any better. Especially if you have to go out of your way to like a page to get the reaction.

So I’ll give it a miss thanks Zuckerberg. If you ever want to make a difference to your LGBTQ users and do something about all the bigots who go out of their way to harras, belittle and bully us let me know.

Until then I will show pride my own way, under my own steam. Do the right things for the right reasons.