So last month we went America for ten days and for me this is my second trip to the US. My first trip was four years ago, the first summer after my wife and I married. This time I knew what I was getting into, and I knew what to expect in some ways. I knew there would be too much salt in all the food (and too much food), I knew that public transport was just not a big thing in the US. And I knew how the money worked and that I could buy some unexpected stuff in the pharmacy.

I knew this but some of it still tripped me up a bit. So here is my list of what I found weird about America.

So the first weird thing I came across was at the hotel in Cape Cod. Sticks to pull open curtains. Instead of using their rough grubby hands on your fine delicate curtains they’ve decided that having a random bit of wood hanging down is a better alternative.

Curtains still get dirty and dusty, you still need to wash them. The stick is just going to get in the way and hit people on the head eventually. Especially clumsy people like my wife and I. It’s something for small children to pull and break, and to be honest it’s ugly.

You could get a stick that matched your curtains but it’s still going to stand out. And be odd.I didn’t use the stick once (nor did I hit my head thankfully). I just used my hands. 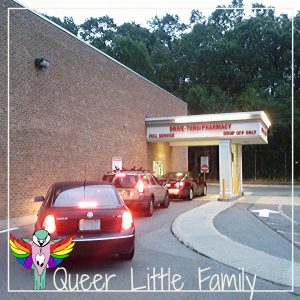 You can get cash out of the cash machine without even getting out of your car. And then go and get your medication too.

It’s both exceptionally genius and exceptionally lazy. Fast food was made for laziness, they go hand in hand. No one is expecting you to run through Maccy D’s during a jog. But a pharmacy? What did someone have a migraine, decide they could drive to the chemist and then crashed into it? And some smart aleck decided a drive through would solve the problem. I need my methadone, I’ll just use the drive thru pharmacy for my supervised consumption of this very strong and controlled medication.

I actually don’t know if they do that in the drive thru – part of me suspects not but then part of me is not surprised by anything in America. And Pharmacies are weird.

Do you think you can open a bank account in the drive through? What do you do? Move over to the passenger side so you can fill in the paperwork on the dashboard? There must be so much leaning involved. What if you have short arms or are just short in general?

What next? Drive through doctors surgeries?

I don’t even drive…. 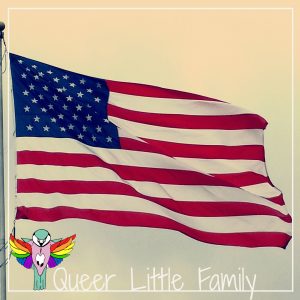 There are flags. Everywhere.

Everywhere. From Cape Cod to Jersey you’re just tripping over flags. There are quite a few flags dotted about Wales; we’re a small country with a history of being overtaken by our neighbours. British flags are dotted about. English flags aren’t common here except round Euro or World Cup time. No one wants to point out that they’re English unless it’s about football or rugby.

In the US there are flags everywhere. Big ones. Not like medium size ones you might see hanging from a window during some sort of sports tournament. Hugs ones that would fly from official buildings can also be found mounted in gardens, attached to random bridges, benches and beaches. Everything has a flag on it. Food, freeways, foliage.

On top of that, there are laws about flags in the states and exactly when and where you can display them and how. It’s called the United States Flag Code. I am 100% not making this up. It is a myth however that you cannot burn or desecrate an American flag. In fact, the Flag Code states that flags unfit for display should be destroyed with dignity, preferably by burning. Desecration of a flag is an iffy subject but technically not illegal. It all depends on how and where it’s desecrated but to do so is protected as ‘symbolic speech’ – as long as you do it at an appropriate time and place.

Here in Britain, there is no concept of desecrating a flag. Cause they live in our hearts (also, they never last in this weather and cost like a fiver to replace). 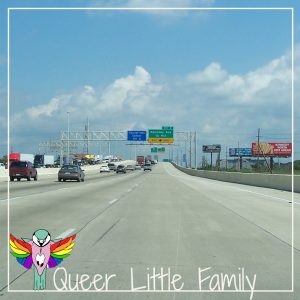 Oh, my word the adverts.

The only thing that there may be more of in America than flags are adverts. There are so many bloody adverts.

I actually think it’s worse for me because not only am I British, but I don’t watch any live television. The only adverts I see are the ones on All 4 when I watch The Last Leg or The Crystal Maze. Or Bake Off. I have Netflix and downloads and DVDs. I saw more adverts in the ten days I was in America than I’ve seen in the past five years.

They are everywhere too. Often incorporating flags for a double whammy of America. Billboards are everywhere. If there is space there is a billboard. Big flashy billboards along every highway and freeway. So you have something to read and watched while you’re driving…that’s safe, right? I’m surprised there aren’t more accidents cause I found those billboards really distracting.

If there isn’t room for a billboard, well that’s okay. Regular advertising will do; posters and signs and flyers on every available space possible and then some on the unavailable space too. Just to get the message across. It’s like if Facebook filled in every bit of white space with an ad. But you’re on the move and this is real life and you can’t just log out.

The adverts are for everything too. Like medicine, you have to be prescribed. Hey, are you a miserable git? Ask your doctor for Happium*, and for the next minute we’ll list the 400 side effects as quickly as possible so we can fit them all in – may cause death. But you’ll die happy. 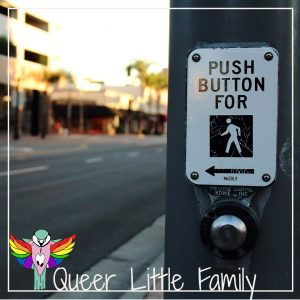 Of the lack there of.

I find that unless a crosswalk is actually going to stop the cars from coming at you, it shouldn’t really count as a crosswalk. It’s like being at a pelican crossing always and the lights are flashing amber. You and drivers both know neither of you are going to stop so good luck everyone.

It’s like that but all the time. There is no green man. He’s not green cause the cars never stop coming. Even when you’re told to walk the cars keep coming. Not all the lights change, only some of them are on red. Some are on turn anyway and hope there’s not a pedestrian crossing (not an official light, please consult your green cross code).

Every time we went to Dunkin’ Donuts down the road a bit from my in-law’s house we have to cross a crossroads. And dodge cars that were legally allowed to turn while we were trying to cross as instructed by the crosswalk.

The walk down to Dunkin’ Donuts was short but not easy. Because there were no sidewalks. Once you got to edge of the houses the paths just disappeared and you have to walk on the road or the grass. If there is grass that is – there’s not always a verge. This was not something I liked doing while pushing my bubby in the behemoth of a pushchair we used while over there.

America is not made of pedestrians. Petrol is cheaper, and cars rule the roads. And the pavements. Public transport isn’t everywhere, pavements are for neighbourhoods and shopping districts. Everything else is tarmacked and driven on. Walking is not American but driving is.

Which certainly accounts for all the drive throughs.

I actually really like visiting America – I could never live there permanently, there are no villages and I don’t drive (also Trump is in charge) but I do like to visit. And there are a lot of things about the US I really like. That’s not weird though and for another post.

What do you find weird about America? Let me know in the comments. Or if you are American, what’s weird about Britain?

*unavailable in all good pharmacies. 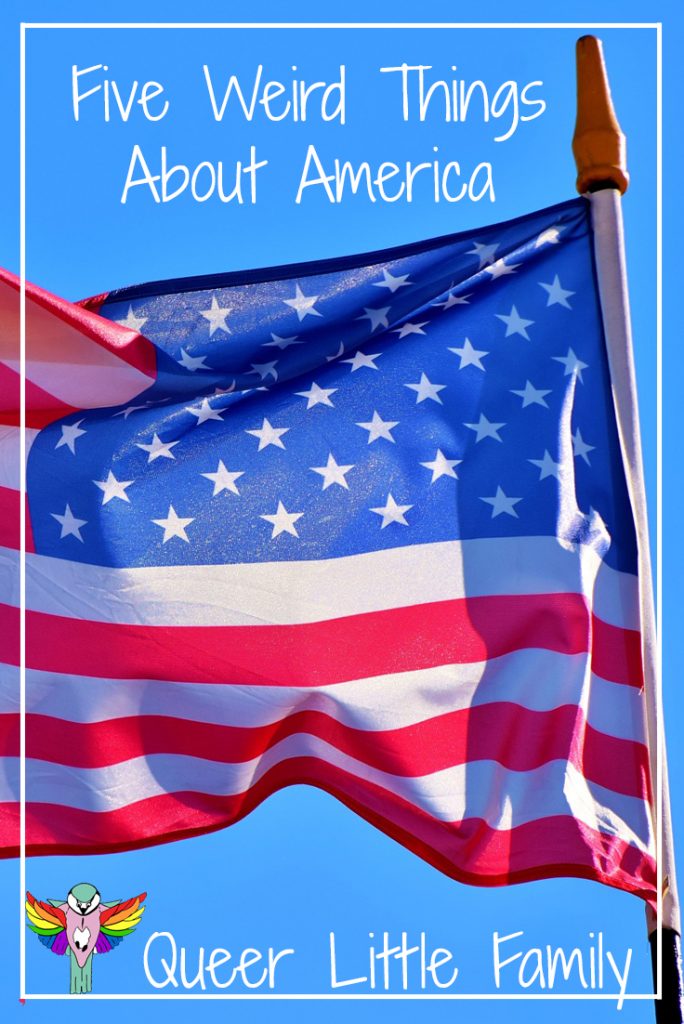