I tackle housework in a sort of wing it, haphazard manner.

In that, I probably make more mess in tidying up than I clean.

It’s not my fault. Really. I do most things in a wing it, haphazard manner, not just housework. It doesn’t seem to be the best way to go about life, it’s not necessarily done me good on occasion but it’s become pretty much an integral part of my character over the years. I’m late a lot, I start a lot of projects that I never finish. I leave my tea bag in my tea when I drink it. I’ll spend all day playing video games and then the last hour before my wife comes then I clean up…

I’m not sure it’s sustainable.

I get more water on me than the plates when I wash up. 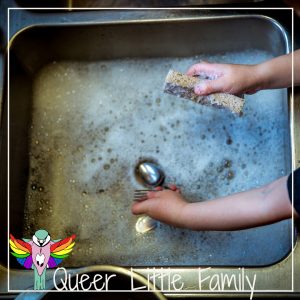 I wash up a bit like a maniac. My wife has seen me wash up a lot, though she pointed out she had never seen me ‘prepare’ the washing up before. And by prepare what she means is pouring washing up liquid all over the dishes from a height. Sometimes from a foot in the air. Just cause I can. And it’s fun. I mostly get everything clean. That’s the important thing right? Like 90% clean…alright, 80% clean. I never said it was one of the things I was good at.

I also get water everywhere.

On the floor, on the cats, on myself.

I always, always have this dark wet spot on my t-shirt over my podge from where water has splashed onto me. Either because I had the tap on a bit too fast or because the water has hit a spoon and gone mental. The podge gets in the way from time to time.

When I was ironing, I burnt my podge. 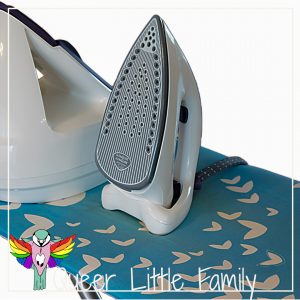 Anyway, in the course of ironing…something, I caught my podge on the end of the iron. The burn wasn’t bad, just in an odd place.

Though not as odd a place as when I burnt my breast – not while ironing. I was warming up a nipple on a cup of tea. I spilt the tea. That’s all you really need to know about that.

Anyway, I don’t really iron much – I enjoy it, but most of my clothes either don’t need ironing or are not the type of clothes that you iron. My nan used to iron my underpants but I only iron clothes I need for formal events. Well, formal events I can’t wear jeans and t-shirts too. I don’t really wear anything else besides my work uniform which only needs ironing if I leave it in the dryer for too long or if the cats have been asleep on it for a while. It also needs de-hairing then.

I used to iron my school uniform. Or, at least some of my school uniform. Like the collars of the shirt and the sleeves. Whatever huge creases had appeared in the trousers or skirt I was supposed to wear. Sometimes done last thing in the evening.

Or right before I was supposed to catch the bus.

Usually, before I was supposed to catch the bus.

I’ve hoovered up a screwdriver. 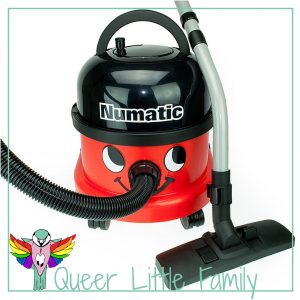 I hoover in the same way as I do everything else in the house really – without really paying attention to what I’m doing sometimes. I like hoovering too, I really like the way it all looks so nice and clean when done, there are few things that make me feel better about my house then when I hoover it up.

Even if there is still clutter all over the table, books piled up next to the already full bookshelf, blankets and cushions askew on the sofa, the fact that the floor is clean is all that really matters. I’m not really sure why that is, but I can’t deny it makes me feel good. So as hard as hoovering up after four cats can be, the satisfaction I gain from it makes up for it.

I don’t always pay attention when I hoover. I just sort of go for it. Unlike when I wash up, there isn’t always preparation. I don’t always pick up the un-hooverable bits from the floor. I just turn the hoover on and go for it and if it’s on the floor it goes up the hoover. This has included: hair grips, pennies, cat litter pellets, wires, wool and entire socks (that’s socks plural).

The screwdriver wasn’t on the floor.

Don’t let anyone tell you that a Henry hoover is no good. I was hoovering up hamster fluff around their cages, we had eight hamsters at one point, and mostly boys who were flingers – throwing their fluff at each other. There was a screwdriver on the bookshelf where the hamsters were and well, then there was a screwdriver in the hoover.

It got stuck in the hose, and well, after that I stopped hoovering with the intention of telling my housemate Jen that I had got a screwdriver stuck in her Henry. Except I forgot and well, then she went to hoover up and it didn’t work.

Lesson learned: you can get a screwdriver out of the hose of a Henry hoover.

I never put my laundry away. 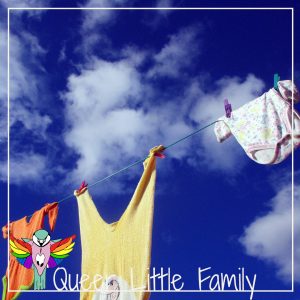 I swear I do a lot of laundry, sometimes I feel like the washing machine is always running. I’ve had it on today – a bag, my work uniform, some other bits and bobs. Then the dryer (an essential item in Wales), and well, it’s not going right now but there is almost an entire machine ready to go again.

There’s two of us. I can’t imagine what it’ll be like when we have kids.

There’s also two baskets of clean laundry ready to be put away. I wear my uniform all week and pyjama bottoms and a t-shirt during the evening. Jeans and a clean t-shirt when I go anywhere that isn’t work – which doesn’t happen much. It’ll get put away, my wife has found the best way to get me to do this is to place it all in a massive pile on our bed.

Especially when I’m still asleep in it.

I never pair my socks either. All my work socks are black, so as long as they’re a similar shade of black I don’t mind if they’re a pair. And I’ll wear odd socks the rest of the time because who cares about my socks. If your life is so sad that my odd socks really make much of a difference to it, I can’t help you.

I set a tea towel on fire. 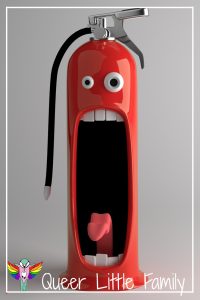 I don’t really cook. I don’t enjoy it on any level. I like eating certainly and have a mighty podge to show for it but I hate cooking. It’s boring. I’ve never enjoyed it enough to be any good at it – I have a few things I can make. Spaghetti bolognese, simple tomato sauce, white sauce for a tuna pasta bake and Corn-beef Hash. And variations on those things.

I find I’m very good at dishes that involve throwing things into a pan. Literally.

I don’t follow recipes very well when I cook I go with what I’ve done for years – mixing it up by adding stuff randomly and seeing what happens. Growing up my mum cooked a lot once we moved to Wales, but I spent as much time with my dad who had one dish – spaghetti bolognese, made with spices that were about a decade out of date.

It promptly burst into flames.

Okay, small flames, but flames all the same.

I can’t even remember what I was making.

On top of this, I’ve ruined my mothers brand new saucepan making popcorn, I exploded one of those microwavable rice packets by forgetting to open it and gave my ex food poisoning (not on purpose).

Luckily for me, my wife cooks and loves to cook. She’s also very good at DIY.

One of the presents I got my wife for Christmas.

I break more stuff than I fix. 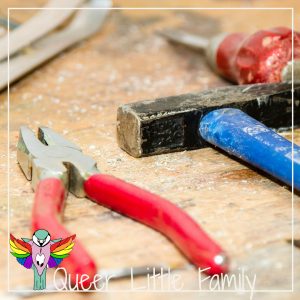 Since I met my wife, I don’t think I’ve needed to fix anything myself. Which is handy because I break a lot of stuff. Not on purpose. I’ve always been really clumsy (she is too, but she can fix stuff).

I break door handles, cupboards, bits of furniture. The bed. Well, the bed just fell apart during some serious conversation. I’ve pulled hooks off walls. A lot of hooks. The toilet seat is currently broken too but I’m not entirely sure that was me alone but a culmination of people.

Luckily my wife is always prepared with a screwdriver to fix anything and everything.

I don’t just break things at home either. I have a bit of a reputation at work. Have at all my jobs. The clumsy one. I am the clumsy one. Wednesday I hit my head on a draw and I’ve broken a lot of plastic coverings for things. If something is broken, odds are it was me.

I’ve only been there a year…

I doubt I will change…much.

I’m better than I was. In that, I actually do housework, like washing up. Or cooking. For the longest time, I was living off microwave meals. For six months the only things I ate were instant noodles and salads from Tesco. I don’t have a great track record of looking after myself. it’s still a struggle and I know that when I have kids, I’m going to have to step up and really work at looking after them. Which may mean at least putting their laundry away…