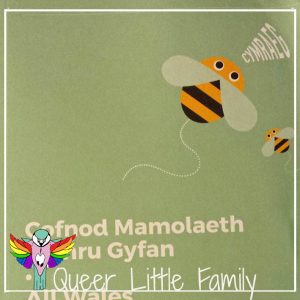 Okay, so I think my head would hurt anyway. I didn’t sleep much last night and I was up early, and I’m in the middle of reducing my medication again.

So my head hurts worse.

Today was our first midwife appointment.

Originally it was next week. And in a town that is only 14 miles away but also in the middle of nowhere and an hour away on a bus. From what I know now we fall under the care of the North country team, rather than the south. Though that still doesn’t explain everything, I mean it’s a big country, mostly empty space and sheep, I’m pretty sure a middle country midwife team would be helpful. Anyway, we had to rearrange the appointment in the end and instead of seeing Amy, the midwife in charge of BE’s care we saw Rhiannon and a third-year midwifery student Natalie.

They were both lovely.

It was and wasn’t what I expected. There was less prodding than I imagined, but as much talking. I know BE was worried they would pick on her about her weight (a couple of brief mentions but that was it) and that I would be sidelined. This didn’t happen either.

The medical notes are not really set up for our situation; I didn’t really expect that to be even if we didn’t live on the edge of nowhere Wales. The form has boxes for the father’s information and some of this is relevant – like his ethnicity and his health and family history – these contribute to my baby’s genetics and that’s fine. Other bits of information are not important, relevant or needed. Like the donor’s religion. The midwives crossed out the word father and wrote in donor, and then added me on in places.

Not that my (lack of) religion really has much to do with it I suppose.

Other than checking my wife’s height, weight and blood pressure and taking some bodily fluids (all things I did expect), it was mostly an information exchange. Her health, her families health, the donor’s health. Do we drink? Smoke? Do drugs (legal or otherwise)? Here is what’s going to happen. And when. And who with.

Apparently, she has to drink less tea.

Okay, so this isn’t really a surprise. During a day off, we can get through a lot of tea. At work, less so (at work, we both admit to never really getting to finish a cup of tea, let alone drink multiple ones) and she’s already switched to Camomile tea in the evenings.

My niece had Slapped Cheek last week. Typical really. While I’m not overly worried there is some contact through me as I saw her not long before when this particular lurgy would’ve been contagious. Plus, I would be surprised if BE hadn’t come across Slapped Cheek during the year or so she’s been working at the nursery.

The accident is another issue. In July last year she was hit by a van (read more about it here), she was very lucky and recovered quite quickly. The lingering injuries are the broken ribs, she still feels some soreness on that side from time to time. The midwives were interested in the other injuries too; the spleen and the brain bleed, and said if she needs any support or any more physical therapy it can be arranged. 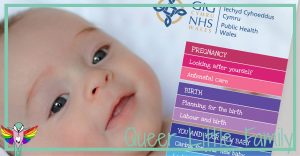 We also talked about screening for Down’s Syndrome and what we planned to do. BE and I had spoken about this already, neither of us has changed our minds. That’s a topic for another post though.

What I had expected but then didn’t happen was something my best friend told me. Her friend and husband had been split up and spoken to separately by the midwife. I assume to make sure the wife isn’t being coerced in some way, that the husband is the actual father, that there are no domestic violence issues involved.

That does not happen here.

Maybe it’s an England thing. Or a city thing.

All in all a good appointment. We left on a little high, and also we a big NHS book of information, a folder for our notes (you keep your own medical notes here), and some free stuff; vouchers and samples of things from companies.

I also came away with a headache.

But that’s okay, I work in a pharmacy, it’s full of painkillers.

So now there are just two weeks until the first scan and that’s what I’m really looking forward too. Because then I can tell everybody (who doesn’t already – it’s the worst kept secret ever) and I can start posting these entries I’ve been writing.

10 Replies to “Meeting The Midwives”