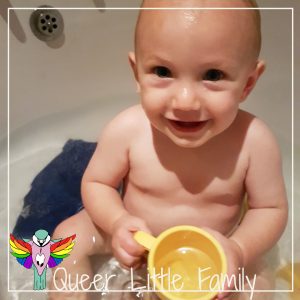 I have a wet sock.

I have a wet sock and my son probably has a stomach ache. All because of a plastic coco pops mug. I wouldn’t mind so much but I had just put those socks on and now I have to put a fifth sock on. Bath time is pretty typical in our house, following the usual pattern. I clean him, he cries and hugs me (so my t-shirt it wet too). He calms down, sits down, splashes for a bit, chews on the ducks and tries to drink the water, He also plays with some toys and then shouts at his willy for ten minutes.

Snappy doesn’t have a lot of bath toys, but then, much like the toys listed in this other post, they don’t really count as toys. Except one.

So this is a rundown of the bath toys my son currently plays with,

This is a new entry to the bathtime toys list. He loves the wooden spoons anyway and when we went up for his bath he wouldn’t let go of it. Even when I stripped him, I had to pull the sleeves over the spoon. He used it to splash the water and make noise with. And very successfully so. 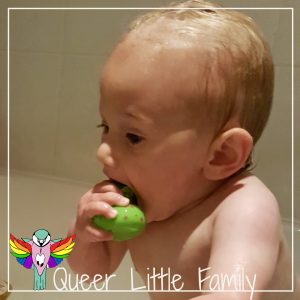 I’ve highlighted this as a single rubber duck because I own about thirty rubber ducks. They’re dotted around the place, a collection I started when I moved back to Wales. Some were presents, two are actually the first present my wife ever bought me (including some chocolate that says ‘I love bread’ in German though I didn’t know it at the time). There are some ducks from our wedding and some ducks I’ve bought myself, and even a couple of Bud Ducks. However, the only duck currently in the bath is the alien duck we bought from the duck race one year. It doesn’t squirt water very well but Snappy does like to chew on it. 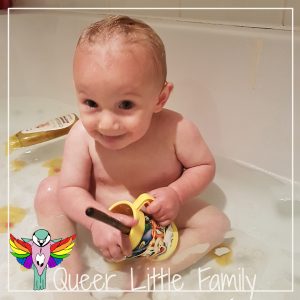 The plastic mug we got free (even though we didn’t buy any cereal) wasn’t always a toy. In fact, it wasn’t even upstairs but an in circulation cup for the various children that parade around my home. It got upstairs and so I used it to wash Snappy’s blonde hair (two brunette mums and a black haired donor…of course he’s blonde). He uses it to drink the bath water and pour water onto the floor (and my feet). And it’s also another thing to throw out the bath for podge to pick up. We’re trying to get him off that game.

So there you have it. Check out what other toys he plays with here and let me know what weird and wonderful ‘toys’ your kids play with in the comments.

*Disclaimer, my wife has thrown out all but the V05 bottle. Not sure why she’s left that one but the rest are in the bin.

** Amendment 15/11/17 – Bethend threw the bottles out because she was fed up of kicking them off the side of the bath but knew Snappy liked to play with the V05 bottle.