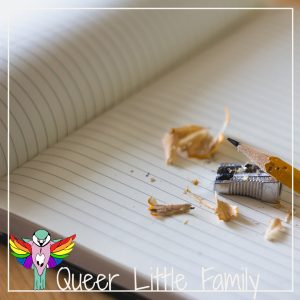 I love a good notebook. I’m a huge fan of stationery in general. Pens, paper, notebooks. Little stickers. I’m crazy about stationary and have been for a long time. Maybe it’s a writer thing. Maybe it’s just cause I’m a little nuts. Who knows? Everyone has their quirks.

I’ve always had notebooks, writing little notes and ideas and poems. I must’ve bought hundreds of notebooks over the past decade and a half. I have a couple of dozen under my bed – empty and waiting to be filled. One of the big things I did to clean my head and my life up was to throw out all the full notebooks I had that were full of fanfiction and stuff I didn’t need to keep. Hundreds of words went to recycling. Most were just day dreams, most written to escape whatever crap was going on in my head or my life at the time.

When I was nineteen I had an orange notebook with a picture of a orange half on the front. I think I got it in a pound shop in. I don’t care, I’ll buy notebooks anywhere, doesn’t matter. I’d had it for a little while since before I went to Uni. In it were poems,  ideas and pieces of the novel I was trying to write. Including a scene I’d written for Perfect Harmony (working title of that novel), where my protagonist is standing on one of the last pieces of Wales not yet under water talking to another character.

I’d actually written it down on a piece of paper and glued it into my notebook so I wouldn’t lose it. A few things I had done like that – written them elsewhere then glued them in to keep them in one place and safe.

On Boxing Day my student house was broken into.

I was living in Leicester – going to college to do a foundation year in science so I could do Chemistry at De Montfort University. The house was new build on the edge of dodgy estate. We weren’t really well liked because we were students; interlopers. We didn’t have to be on the estate. We didn’t necessarily want to be there but we needed somewhere to live and it was literally across the road to the college we were all going to (most of us were doing various foundation years).

For the Christmas holidays me and my sister who was fifteen at the time travelled from Coventry where my dad lives to go shopping in the Boxing Day sales. The house was empty because everyone else had gone home for Christmas too – but my sister and I would’ve done anything to get out of the house back then. We were planning to stay overnight, she’d stayed with me a couple of times before during half term and holidays. We set my TV up in the living room, and then went out shopping.

When I came back the television was gone. So was the microwave and our bags. Luckily all of our individual bedrooms were locked up so my pc and other belonging weren’t touched but the bag, boy the bag was gone.

In the bag was a few things including my Coventry City replica football shirt and the orange notebook.

Never To Be Seen Again

The only thing that was recovered was the microwave. It was found in a house down the road from us – with a family of people who’d been harassing us since we moved in. Someone was arrested on handling stolen goods; they couldn’t prove they had actually broken in. The TV, bag and it’s content were never seen again.

My dad bought me a new TV. I bought myself a new bag. I already had notebooks waiting to be filled and eventually I got a new City shirt too.

The words are gone forever.

The scene remains in my head in some sort of vague way – the two characters on a hill, sky dull and grey behind them but I’ve never written it back down that way. In fact, I’ve written around 30,000 words of this novel and I’m pretty sure (it’s been a while since I’ve read it over) that does not feature this scene.

At the time I felt like I would never be able to recapture the scene properly. Not that it was a perfect piece of writing, but how it made me feel – those emotions – were as lost as the actual words were. This was 15 years ago, the novel sits unfinished in a file on my laptop (with back ups on a hard drive).

I’m a serial quitter. Not just of novels – though the half a dozen started novels on my laptop do make up a great deal of stuff I’ve quit or abandoned. Courses, jobs, friends, myself. I’ve quit all sorts of things. Every since the memory of this stolen notebook was dredged up through a simple question about losing notebooks or work in a facebook group I have been thinking about these novels. Perfect Harmony, Pink Sunglasses, Acher’s Anomaly just sitting waiting for the words, the rest of the story.

So I’m going to finish one. At least one by the end of the year. Even though I’m working, have a baby, two blogs and mental health problems I’m gonna finish one of these novels.

I’ve copied them all over to google docs – I thought that might help. That way I can read through the words wherever I am as I reacquaint myself with the stories and add ideas to. I’m starting with Perfect Harmony and seeing how I feel about it, now fifteen years after I started it.

That scene in that maybe gone but there are over thirty thousand words that still exist and I shouldn’t ignore them any longer.

4 Replies to “The Stolen Notebook”