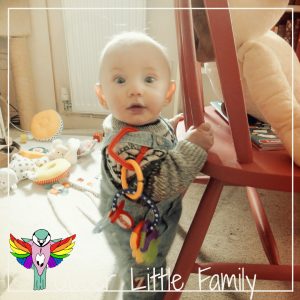 2018 is upon us and while last year about getting to know Snappy as he develops more of his own personality (and boy howdy does he have personality) this year is going to be about having another baby. It’s always been the plan to have at least two children, though the final numbers are still in negotiation. We don’t want a big gap between them so this is the year to get pregnant again.

Unfortunately the donor we used to conceive Snappy is unable to donate again right now. and while we could wait we don’t know if their situation will change. The source isn’t so important, but it does mean finding another donor. I started this blog when my wife was already pregnant I have talked a little about the process; mostly about how awkward it is to make a baby this way and I’ll go into more detail as we go along but for now just let me say that finding a donor takes time and can be frustrating.

It’s worth it though. Even though our original searches and donor the beginning half of 2015 didn’t come to anything – mostly because my wife was hit by a van that summer – we found a donor and had our son and our lives have been unparalleled since. I don’t always have words for how happy he makes me. Even when he makes me angry or sad. 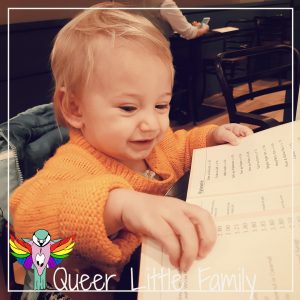 Part of me was and is scared we won’t have another child. This is a bit of a change for me. Before I got married I was settling into the idea of always being single. Ten years ago I wasn’t even sure I’d be alive at this point. Fifteen years ago I was actively putting off having kids with my ex.

Now the only having one child fills me with anxiety. I love my son but for some reason, I had taken it for granted he wouldn’t be the only one I would have to love. It’s not easy to conceive this way but it is possible. Especially when your wife’s hormones are stupidly healthy (mine are not and it’s really annoying). Last month I was more worried but now I’m actively looking for another donor I know we will have another kid.

And instead, they’ll be a whole host of other stuff to worry about I’m sure.

Snappy is a very loving croc so I’m not worried about him rejecting a sibling though I worry about his demands for attention and snacks and lorries and how we’ll cope with a newborn’s demands for attention and milk and clean nappies. That’s the challenge though and the payoff is two adorable people to love and be loved by. Plus Snappy will gets another person in his life to love him too.

Who can say no to that?

I will be writing the process of actually finding a donor, the laws around using known donors (as opposed to unknown/anonymous donors through a clinic) and other things to do with the process but if you have anything, in particular, you want to know – just in get in touch. Leave a comment on this post or use our contact page. I’m happy to share and offer advice and am always looking for stuff to write about.