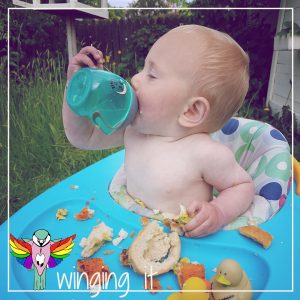 Sometimes he reminds me of a tiny Roman emperor feasting.

Snappy has weaned himself off breast milk.

We helped, but to be honest he did most of the work himself.

He’s been eating pretty well since we started him on mush just before he hit six months. He went from one meal to two meals a day pretty quickly. My wife gives him fruit and yoghurt for breakfast, sometimes toast and then I give him his dinner. Usually veg or a baby-friendly version of what we’re having.

Once he figured out how to feed himself he would not be spoon fed. And once he figured out how to use his gums to both chew and strip his food like a hungry lion he was done with mush entirely. If he couldn’t shove it into his own gob with his own fists he wasn’t interested. Yoghurt he’ll have fed to him – for a time – eventually, he will take the spoon from you so he can do it himself.

Or at least try.

Bethend started reducing his feeds pretty easily and gradually. He didn’t seem interested in breastmilk during the day so she fell into a pattern of feeding him first thing in the morning (his first thing, 5 am) and then after dinner (his and ours) and before his bedtime. Which then was reduced to when he woke up and before bed.

One day he stopped looking for a feed in the morning.

Then he stopped looking for a feed before bed too.

Then he was done.

We literally did nothing, it was all him. I have no advice to give except that we have an exceptionally stubborn and independent baby (too much like bethend really). The morning feeds were replaced by breakfast only – fruit, yoghurt, a cup of cows milk. And before bed, he wanted snuggles, not a feed.

It’s been two weeks. More than. 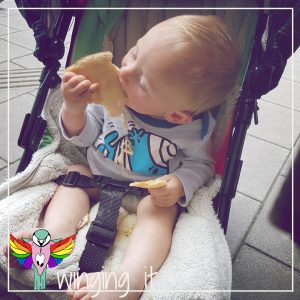 We tried pizza for the first time this week.

He eats like a gannet. Though, not that I think about it people have used that phrase without ever explaining to me how a gannet eats. He eats like a hungry cat. An actually hungry cat, not a cat that will tell you it’s hungry right after it’s wolfed down a bowl of biscuits.

Or ‘catted’ down a bowl of biscuits as the case may be.

There is very little he won’t eat or try. We don’t give him bell peppers or apples for obvious reasons but bethend is thrilled to be able to eat both of those things now. Especially apples. I don’t think even she realised how many apples she used to eat.

He has a system for eating. Especially new foods. He will take a bite out of every piece. So if you chop up a peach for him he will take a bite out of each segment, then with a piece in each hand commence the serious eating. It’s brilliant to watch, he’s quite particular about it, despite being fifty after every meal. He also really likes having a piece of food in each hand.

He loves veg, though he wasn’t keen on cauliflower (like podge mummy). He likes chicken and minced beef – loves fish fingers, will eat anything if it’s got avocado on it. We don’t feed him anything from a jar or a packet because we don’t eat that sort of thing ourselves. We’re trying to keep as much extra sugar out of his diet as we can. His treats are biscuits – fig rolls (fig newtons in the US) and the occasional bit of whatever we’re having. Ice cream, cake.

More than anything I worry about him being addicted to the sugar, or like the processed foods and sugars more than he likes what we make him, so I’m very aware of what we give him.

Learning about the changes your body has gone through when you have a baby is enough to put me off for life, and I was already pretty damn sure I didn’t want to get pregnant long before I met bethend.

I know you have to bloody grow new bits to accommodate our son, the womb for him to live in rent-free for nine months and then milk ducts so he can be fed for however long he deems necessary. And these milk ducts don’t go away, there just there. When you stop breastfeeding they dry up, waiting for you to do it all over again when a sufficient time has passed that you’ve forgotten about the lack of sleep, the choice between clothes with snot on them or with sick on them and the general anxiety that dims but never really goes away.

And that’s just me. 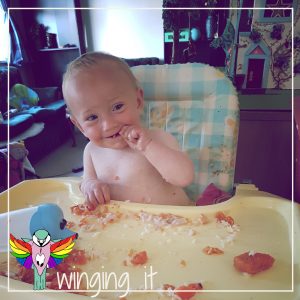 So bethend has finished breastfeeding and for the first week, that was really painful. Then it was annoying.

Anyway, things have settled down, for us all in terms of feeding. He has three meals, with a cup cows milk morning and night at least and water during the day. Plus he now has a snack because he doesn’t eat til I come home from work and sometimes that’s at six and sometimes half past. And he’s usually a grumpy sod long before that.

I don’t have much advice for you, I didn’t do any of the work. And bethend just went with what he wanted. Which is probably the best advice. Go with what the baby wants. We do it the rest of the time and until he’s 3 we’ll be giving him what he wants anyway right?

Okay maybe not, but you get my point.