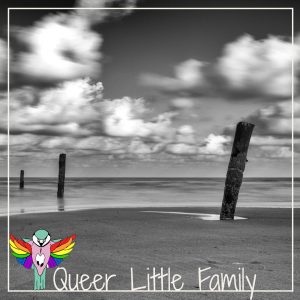 It’s been a little while since I wrote some fiction and any Kara and Etta stuff. So here is a little bit to get me going.

They’d been travelling for a while now, through what was left of Europe and Kara was pretty sure they were in Germany, but so many of the places had lost their names. There had been a sign somewhere along the path to the beach, long faded and only a few letters could be made out. N-something, Nor-something Kara had thought.

“They do now.” She replied after a moment. Etta kicked at the grey sand that extended flat and wide, hitting the horizon in nearly every direction they turned.

“What did they use to look like?” she asked, sinking down into the damp sand, leaning back against an old wooden stake in the ground. Kara followed, grimacing when the cold seeped through her skirt. Etta smiled and pressed her hand to the sand and murmured something that was caught on the wind before Kara could hear it. A warmth spread through her bottom and she jumped with a squeal. Her friend laughed then, and she settled at the noise.

“Thanks,” she muttered with a small smile of her own.

“Oh, yes, they were colourful.”

Kara nodded, trying to remember pictures her mother had shown her as a child. They had lived in a library basement with another family for a long time and had spent most of their days reading their way through the library.

“The sand was yellow,” she said and Etta murmur something and waved a hand over a patch of sand, turning it as yellow as the sun. Kara smiled and reached out to touch it. Lifting up a pile of sand it turned grey again and Etta shrugged.

“The sky and the sea were blue, one darker than the other.”

Another mumble too quiet for Kara to catch and a stripe of sea and sky turned blue. The sea was light blue, the sky darker and she frowned.

Etta reached out and turned her hand, the stripe of colour following the movement from vertical to horizontal and vertical again.

Kara wasn’t sure and she looked out over the cold water, the waves lapping gently on the grey shore.

“Ice cream cones and people sunbathing on blankets and swimming in the sea.”

“People went in the water?”

Kara nodded, their water supplies were carefully filtered now and even then, everyone had a mage filter is a second time. Just to be sure. Both had heard stories of people falling down dead in the street after a shower, exploding after a glass of water. All stories from a long time ago, right after the war but they lingered in the social memory.

“Wasn’t as polluted back then, and it definitely wasn’t polluted with magic,” she explained.

Etta nodded and they watched her spell wear off, the colour muting back to grey.

“Bet the world was lovely back then,” Kara said softly. “Houses and shops and rivers and fields.”

“Maybe it will be again,” Etta said smiling.

“You told me magic lasts forever in one form or another,” she replied with a frown, “if were ever to be rid of it, surely we would be by now. The aura is corrupted, the planet polluted, the world has changed and there’s no going back.”

“Only forward,” Etta said. “So we’re going forward with it right?”

“Only way to save the world,” Kara said, jumping to her feet. She brushed the specks of grey from her skirt and held out a hand to her friend.